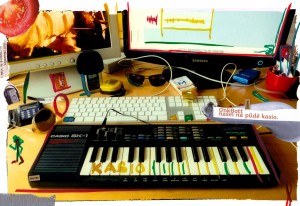 “OnkBott found a Casio in the attic” is based on a listening experience familiar to us all. In everyday reality, it is nearly impossible to perceive music without outside influences. There are always other factors involved: the sounds of the surrounding environment, the atmosphere, mood.

The composition “OnkBott found a Casio in the attic” starts from the viewpoint of the listener. It builds on the experience of mediated listening, where the original sound composition mixes with other sounds and the original source material becomes a “mere” actor in the space.

In the classical sense of the word, remix means re-interpreting a piece of music. And what is putting on music if not the most natural and basic form of remix? The music is re-interpreted by the space and by the sounds which appear in this space. Try sometime to listen to the sound of church bells, and you will become aware of everything else you hear: bells, the noise of a passing streetcar, laughter from the window of the neighboring house, the sound of high heels on the pavement, the rustling of leaves in the trees, the clicking of the traffic light around the corner, the murmur of the city in general… Only under very specific circumstances are we able to filter out all these outside influences, and even then we still have to contend with our own “remixing tools”: the sound of our breathing, the heartbeat, skin rubbing against skin…

The original idea was to apply a kind of “scientific” approach in which the individual recordings would be sequenced one after the other, with dry commentary on the location and time of recording. Soon, however, it became clear that this approach was more suited to a museum than for radio, and although it did not lack a certain sterile magic, the outcome was not much fun to listen to. So I tried to shift towards an empirical approach along the lines of “how will that sound there,” and tried to see the recording as a new source material which I could use to create a new composition…

Following various experiments and attempts, the composition ended up being based on a three-minute audio recording created with the simple but legendary Casio SK-1 keyboard and audio programming language SuperCollider. This composition was then played in various spaces and locations using all kinds of playback devices. The resulting audio “mix” was recorded and used as the source material for creating the final piece.

The OnkBott character mentioned in the title is a personification of the entire creative process, a strange entity who came to life in the cabinet among the cables while working on the project.